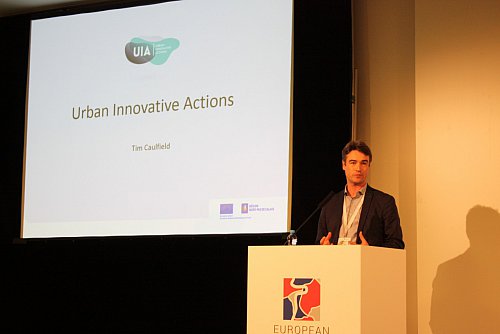 Representatives from all countries from Europe have met and discussed “Housing in Liveable Cities” and Priority Area 2 “To Encourage More Sustainable Energy” of the EU Strategy for the Danube Region was present as well!

About 72% of the EU population lives in urban areas. Towns, cities and their suburbs face multiple challenges regarding the energy. Rising energy demand, inefficient energy usage and also energy poverty are among them. With the impact of urban areas on energy global consumption and the importance of approaching energy challenges in a strategic way in the urban development, the Priority Area 2 hosted a workshop “Cities in motion of energy transition: how technology and data help urban development” on the 16th March 2016 as part of the European Habitat III.

The workshop was focusing on the questions of which problems are the municipalities facing when dealing with the issue of energy managements, what are the trends in energy urban development, how can the municipalities finance innovative projects and what is the role of transnational projects in achieving transferrable and participative innovations in urban planning.

Mr. Tim Caulfield, the director of the Urban Innovative Actions, presented the newly launched UIA, which helps to finance innovative projects in urban development and the first call, which focused on energy. He stressed that the urban planners and municipalities should not be afraid to take up innovative or even experimental practices. Mr. Ivo Slavotinek from the company ENESA, who presented how municipalities can liaise with private companies in order to work on affordable and innovative solutions for increasing the energy efficiency. As examples of good practice he presented several cases from the Czech Republic, such as Smart Region Vrchlabi. Urban planners often lack the expertise or experience with innovative projects when dealing with energy transition. However, they can employ the expertise of the academia and researchers, just as in the case of the European project Pocacito. The experience and lessons learned from the Pocacito projects were presented by Mr. Miroslav Havranek from the Enviroment Center, Charles University, who focused on the cooperation with city Litoměřice in low-carbon transition. Very often it is also necessary to work with the inhabitants of the urban areas to make an impact. Mrs. Marlene Potthoff presented the project ACHIEVE, which originated in Germany, but was later multiplied on the transnational level and is focusing on energy poverty Bulgaria, France, Germany, Slovenia and Great Britain at the local level and engages the citizens in their homes to undertake solutions for saving energy. Mr. Zoran Kordic from UNDP Croatia then presented innovative ways of funding the energy poverty related projects and Zagreb as low-carbon city.