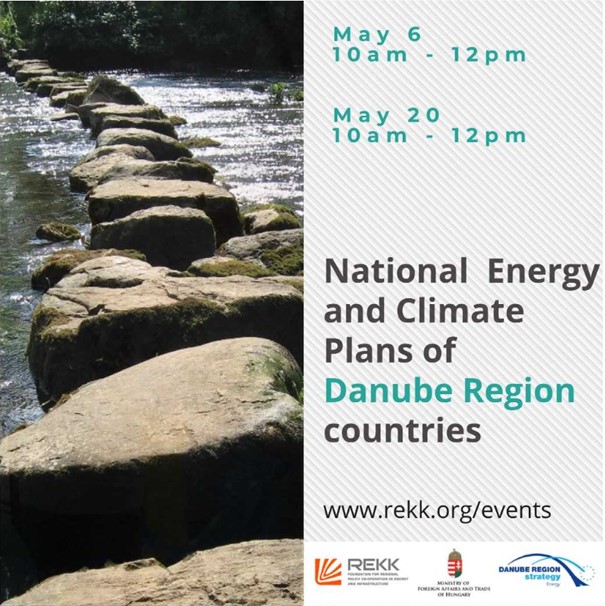 In May a two-part workshop series was organized presenting and discussing the main findings of the study: “NATIONAL ENERGY AND CLIMATE PLANS IN THE DANUBE REGION“, prepared by the Regional Centre for Energy Policy Research (REKK) and published by PA2. The study provides a comparative assessment of the targets, measures and expected outcomes laid down in the National Energy and Climate Plans (NECPs) of EU member states belonging to the Danube Region, and the energy strategies of the non-EU Danube Region countries where NECPs are in progress. The analysis focuses on the planned development in the most important areas of energy consumption: electricity and gas markets, heating and cooling, transport, buildings and the industry sector.

The first event on May 6 focused on the targets, measures and expected outcomes related to the electricity and gas sectors, and sector coupling. The panel discussions with invited speakers from the Danube Region showed that reaching the targets set in the NECPs presents significant challenges to the countries and raises several questions. Phasing out coal and lignite is key for decarbonising the electricity sector, but many countries will continue to rely on coal-based generation after 2030. The role of natural gas in the next decade is not clear in the NECPs. Albeit NECPs refer to gas as a transitional fuel, projections do not seem to support the “coal to gas” switch. The plans predict a stagnating natural gas consumption, but contradictorily high gas infrastructure investments. Panelists discussed the question whether countries should engage in large investments both in gas infrastructure and gas power plants for some years and then build renewable capacities, or rather switch directly from coal to renewable electricity and flexible resources.

The second workshop on May 20 covered two important energy policy areas largely influencing decarbonisation efforts in the (yet) non-ETS sectors: the deployment of renewable energy in the heating and cooling sector, and the transport sector. The transport sector is the only sector in which emissions have been rising steadily over the last two decades, and the rate of growth was higher on average in the Danube Region than in the EU. However, NECPs are optimistic to be able to change that trend with measures targeting fuel switch, modal shift, and efficiency improvements to deliver emission reductions. In the heating sector biomass is to remain the dominant renewable energy source in 2030. Accounting forestry biomass with zero carbon emissions while ignoring the climate economic value of forest sequestration and carbon storage poses a risk to a significant loss in carbon stocks and carbon sequestration potential in both the EU and non-EU Danube Region countries. Panelists agreed that biomass use in rural Central European regions is often connected with the problem of energy poverty, which needs to be addressed by proper financial and social instruments.

Policy briefs in the topics of electricity, gas, heating&cooling and transport, agenda, presentations and workshop summaries are available here:

The future of the electricity sector in the Danube Region

The future of natural gas in the Danube Region

The development of renewable heating and cooling in the Danube Region