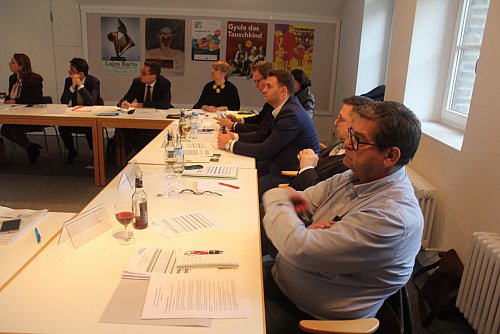 The Czech coordination has hosted the 11th meeting of the Priority Area 2 steering Group on the 28th October in Ulm in the historic premises of the Donauschwäbisches Zentralmuseum. The Steering Group meeting took place back-to-back with the 4th Annual Forum of the EU Strategy for the Danube Region, which took place on the 29th and 30th October.

The meeting has been opened by the Priority Area coordinators, Ms Markéta Ročejdlová from the Office of the Government of the Czech Republic and Mr Pál Ságvári, Ambassador-at-large for Energy Security from the Hungarian Ministry of Foreign Affairs and Trade.  The agenda of the meeting has proved that despite summer break, the EU strategy for the Danube Region as well as the Priority Area 2 has been busy.

Marco Onida, Team Leader from the European Commission has touched upon the work of the DG Regio focusing on the embedding of the Strategy in the national as well European funds. He also presented activities of the DG Region ensuring closer cooperation with other actors not only within the Commission itself, but also with the newly launched DANUBE Transnational Programme Joint Secretariat. The Steering Group also welcomed representatives of the new governance body of the EUSDR, the Danube Strategy Point, the senior officers Mrs Janeta Toma and Mrs Violeta Popova and the Head of the DSP, Mr. Matija Vilfan who presented the work of the DSP in its first 100 days of functioning and also its plans for coming weeks.

Traditional overview of latest developments since the last Steering Group meeting has been presented. The Steering Group members have been updated on the progress of the PA2 supported projects DANUBIOM, SMEP, RESTAR and also the Danube Region Geohermal Concept and the project DARLINGe which has been presented by Mrs Annamária Nádor from the Geological and Geophysical Institute of Hungary. The results of the second call of START and TAF-DRP seed money facilities have been announced.

In the second half of its meeting the present members of the Steering Group has discussed the future priorities during the debate on the revision of the targets.

Agenda and presentations from the 11th meeting of the Steering Group of the Priority Area 2 can be found below:

Please find the agenda of the meeting and the presentations below: