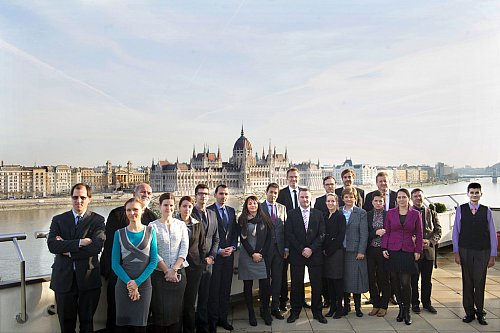 The Hungarian coordination hosted the 9th Steering Group Meeting of the Energy Priority Area in Budapest, on 4th December 2014, with a record number of members being present, from 13 countries and regions.

In his opening speech, the Hungarian National Coordinator, Ministerial Commissioner István Joó emphasized, that the Strategy is no magical remedy that offers solution to all challenges of the region, however, if we set up realistic expectations as in the case of Priority Area 2, it could offer great potential to turn regional challenges into regional opportunities. Mr Mihajlo Junger, Chargé d’Affaires, Embassy of Ukraine in Hungary expressed his view that the EU Strategy for the Danube Region is a serious and influential body of maintaining stability and security in Europe. At the same time, the countries of the Danube Region are among the key EU member states that have strategic importance for Ukraine on cooperation in the diversification and convergence of energy markets. The new Executive National Coordinator from the Office of the Government of the Czech Republic, Eliška Gerthnerová was introduced to the Steering Group members, who welcomed the participants.

The Chief Advisor to the Hungarian Priority Area Coordinator, Szilárd Árvay outlined the results, achievements and developments happened since the last SG Meeting in July 2014. Vladimír Bláha, the Czech Priority Area Coordinator summarized the activities of the Czech coordination. Marco Onida, team leader and Ann-Jasmin Krabatsch from the European Commission (DG Regional and Urban Policy) evaluated the activities of the priority area, then Ádám Szolyák from the European Commission (DG for Energy) presented the latest developments and current state of play in the North-South Interconnections (NSI) East.

In the afternoon session Tobias Eisele representing Baden-Württemberg presented the Serbian-Baden-Württemberg partnership on bioenergy, the ‘Learning Energy Efficiency Networks (LEEN) in the Balkan Region’ project and the idea of a Hydro-energy Cluster. This was followed by a presentation on Guiding Principles of Sustainable Hydropower Development in the Danube Basin from ICPDR (Raimund Mair). The participants also received information on the recent developments of the Danube Transnational Programme from Mr Imre Csalagovits and on the energy related calls of the HORIZON2020 from Ms Zsuzsa Mokry.

Please find the agenda of the meeting and the presentations below: